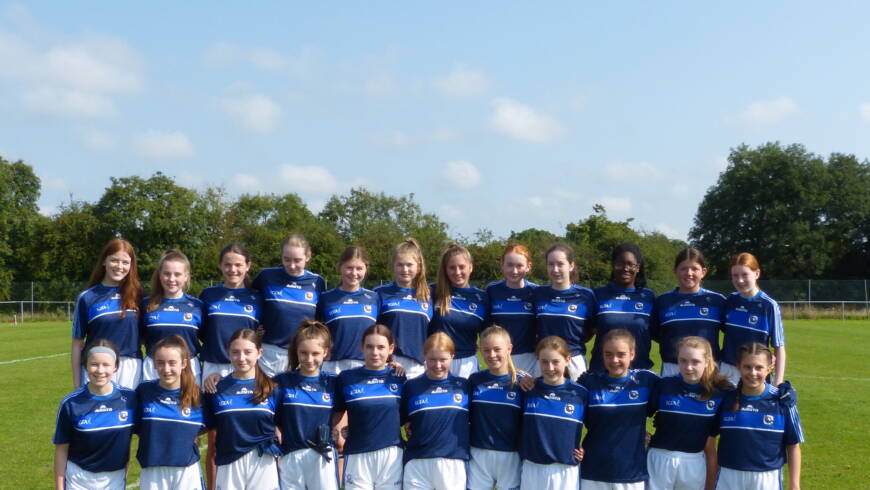 Skryne U15 girls travelled to sunny Grangegodden last Saturday to take part in the Feile Shield.

Each game was 24 minutes long which when first proposed seemed a little short. However, with the weather being so hot, this may have proved a blessing in disguise, particularly since Skryne’s route to the final saw them play 6 matches, 5 of these were back to back, so the schedule certainly didn’t favour Skryne.

Group Stage: Skryne were drawn in a group alongside Blackhall Gaels and Kilbride.

The first game threw in as scheduled at 12 noon…high noon. Skryne faced the eventual champions Blackhall Gaels. Skryne got two early points from Aoife McLoughlin and Aine Keogh but the Gaels reeled off two goals and a point to lead at half time. Blackhall Gaels: 2-01, Skryne 0-02.

Skryne upped their performance in the second half limiting Blackhall Gaels to just one point while Aine Keogh added a second point to her tally. Caoimhe Giles shone in the second half, scoring two points before bagging a last minute goal which levelled the game as the final whistle blew.

Skryne had a break of an hour between their round 1 game and their round 2 game. With the sun beaming down, the girls sought a shady location to take some well earned rest and to eat some lunch and then it was back to business against Kilbride who shocked Skryne with an early first half goal. Skryne struggled to find their range in the first half, but two quickfire points from Aoife McLoughlin and Sara Pentony saw them reduce the gap to the minimum at half time. Kilbride 1-00, Skryne 0-02.

Skryne were much better in the second half and soon took the lead when Aoife McLoughlin and Megan Cowley both found the back of the net before Caoimhe Giles added a point. Some great goal-keeping from Ellen Hogan ensured Kilbride got no further goals. Kilbride did notch up two points before Kate Gibbons polished off the win with a last minute point.

While Skryne finished level on points in the group with Blackhall Gaels, Blackhall advanced as group winners by virtue of the fact that they scored one more goal than Skryne in the group game between the two sides. Consequently Skryne had to take the scenic route to the final by playing two knockout qualifiers before they even reached the semi-final, while Blackhall Gaels went straight through to the semi-finals.

Skryne started off well in their game against St. Ultans. Megan Cowley and Kate Gibbons pointed for Skryne before Laura Mangan hit a goal. The Ultans had a single reply on the stroke of half time. Skryne 1-02, St. Ultans 0-01.

Ultans set out about reeling Skryne in when they scored two early second half points. However, Skryne notched up a goal and three points without a reply to race into a 2-05 to 0-03 point lead. The scores coming from Aine Keogh(0-1), Caoimhe Giles(0-1) and Kate Gibbons (1-1). St. Ultans did get a consolation point in the last minute but Skryne ran out convincing winners to progress to the second qualifier, their third game in a row.

Another fantastic performance from the girls in the second qualifier saw them overcome Seneschalstown by 3-05 to 2-02 as they continued to march on to the final.

Then after all of the qualifiers we were in a semi-final where we played Walterstown. Walterstown had benefited from a rest having played only 3 games to reach this stage while our girls were playing their 5th game.

The girls gave 100% all over the field in the scorching heat but trailed by 2-3 to 0-1 at half time. It looked like all was lost, but these girls just don’t know how to give up and a terrific performance in the second half saw them turn the game on it’s head. Ellie Kate Mc Donnell put in a massive save in goals. Then a goal and a point from Caoimhe Giles and a goal from Megan Cowley brought us right back into contention. In the last minute of the game Laura Mangan scored a super point to put us in the lead as the final whistle blew.

After a marathon of games, it was back to where we started, a final against Round 1 opponents Blackhall Gaels. By this point, the girls were exhausted. This was their 5th back to back game and their 6th in total. Despite Aileen O’Connor’s heroic efforts at keeping the girl’s energy levels up with endless supplies of snacks, fruits and jellies, not to mention a steady flow of water to ensure the girls didn’t get dehydrated and bags of ice to keep them cool, the demands of the schedule took their toll on the girls and when the final arrived, they could give no more.

Despite losing the final to Blackhall Gaels, our girls have done us so proud, showing so much grit, determination and commitment in all of their games.

A special mention to Aisling O’Connor who made a return to action after a 10 weeks absence due to a leg break earlier this year. Aisling looked like she’d never been away, putting in some fine performances throughout the day. It was great to see her back in the blue and white.

We also had terrific performances from our defensive unit of Destiny, Rebecca, and Katie Purcell who were rock solid, while Shauna and Roisín gave an exhibition in tackling and dispossession. Our star centre-back Emily Kelly who has an engine like an Airbus did a tremendous man-marking job on Blackhall Gaels dangerwoman Poppy. In midfield too, Beth Shanley ran at least a half marathon as she covered every inch of grass in Grangegodden. Well done to our substitutes Claire, Emma, Meabh, Ailbhe and Cara who pitched in when needed. All good teams need good backup. Finally Síne is still nursing an injury but provided excellent support on the sideline as she cheered the girls on.

Well done to all involved!!

A big thank you to our sponsors Gemma Mc Donnell from Focus Health who sponsored our lovely new Masita training tops. Stephen Reeves from Stephen Reeves Crash Repairs for sponsoring our new kit bags. Also a special thanks to Trevor Giles from Tara Physiotherapy Clinic, Ken Pentony from Tara Landscaping and Stephen Kelly from The Flooring Mill for their generous sponsorship. Please support our sponsors and all local businesses. 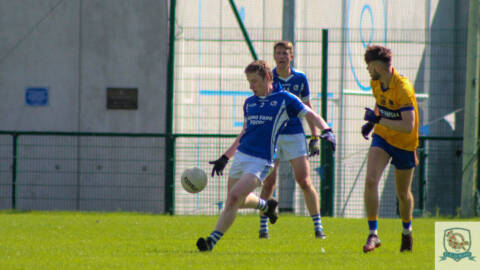