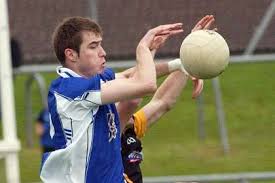 Skryne reserves  took to the pitch on a cold Friday evening in Skryne seeking their first win at adult level in the 2019 season. The lads didn’t disappoint and were convincing winners over North Meathmen Gaeil Colmcille.

Gaeil Colmcille were first to get off the mark with two quickfire inside the first three minutes. However, their forwards failed to hit the target again until 22 minutes later by which time Skryne had plundered 8 points of their own, five from the boot of Ian Davis who was in ruthless form. Jason Reddy, Ciarán Finnerty and John Morley were also on target for Skryne during this period. Gaeil Colmcille squandered two gilt edged goal chances in the space of 2 minutes midway through the half, with the first a wild shot which flew wide of the posts while Des Mc Avinney batted away the second. Apart from these two chances, the Skryne defence were well on top throughout and gave the Kellsmen few opportunities to score. Gaeil Colmcille did add two pointed frees  late on in the half to reduce the deficit to four points, but a terrific move started in the Skryne defence saw Craig Nolan swap passes with colleagues as he ventured deep into Kells territory to tap over an excellent point from a narrow angle on the stroke of half-time to leave five between the teams. Half-time score Skryne 0-09, Gaeil Colmcille 0-04.

Any thoughts of a second half comeback for the Gaeils were immediately dashed when Ian Davis added his sixth point almost immediately after the throw in with another pointed free. A poor kickout from the Kells keeper was snapped up by John Morley who punished the mistake emphatically when he slammed the ball to the back of the net for the only goal of the game. Kells were a beaten team from then on and the game was over as a contest. Skryne added three more pointed frees, two from Ian Davis and one from John Morley , while the Kellsmen registered only two pointed frees for the entire half. Final score: Skryne 1-13, Gaeil Colmcille 0-06.

Skryne were delighted to welcome back Paddy Carpenter who made his first appearance in a Skryne shirt since Storm Emma last year.