All Ireland Finals this Saturday for Skryne GAA Rounders teams 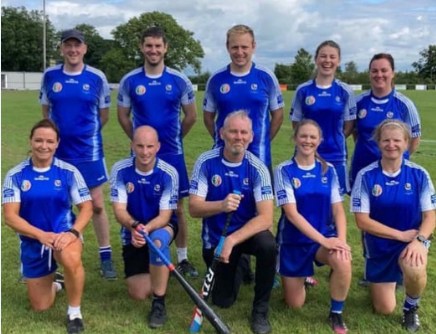 This weekend on Saturday 11th September, three Skryne adult rounders teams will be hoping to become All Ireland Intermediate Champions.

It’s a great achievement for a club that was reformed in 2018 for adult rounders. In the 80s rounders was at the pinnacle of the Skryne Community.  Winning All Irelands, playing in Croke Park, Community games and traveling to the USA, were some of the many highlights and achievements of the club over 30 years ago.

In 2020, our Ladies reached the All Ireland final against Athenry, but were narrowly beaten on the day. This year they will be looking to do better when they meet Barntown Gaels on Saturday at 4pm in Portlaoise GAA. The ladies had an easy path to the final winning many games with innings to spare. Their only defeat was against Barntown Gaels, however on that day Skryne were missing some players so they are hoping to turn that result around on Saturday. The team is made up of newcomers to the game along with seasoned rounders players like Ann Gorman and Maggie Smith who played back in the 1980s & Deborah Mangan who’s household was massively involved in Skryne rounders back then. Some of our newcomers have excelled at the game given their GAA & sporting backgrounds, like Kayleigh Crinnion, Mary Ellen & Treasa Sheridan to name a few

Also in their first final is the Men’s team who also were narrowly defeated in the preliminary rounds by their final opponents, Michael Glaveys of Roscommon . However, with the availability of some of the young guns like Sean Keogh and Eoin Finnegan alongside former county hurler, Nicky Horan & seasoned rounders players like Louis & Kenny Pentony, they will be hoping to come away with a win on Saturday. That game is fixed for 11am in Portlaoise GAA

The third team in the final is the Skryne mixed team. Nine players field on a rounders team and in the mixed game, the minimum amount of ladies to play are four. The four ladies that start for the mixed team are Ann Gorman, Lisa Horan, Mary Ellen Sheridan & Deborah Mangan. The remainder of the team is made up Eoin Finnegan, Nicky Horan, Cormac McMahon, Lee Mulligan & Louis Pentony.  This team topped their group on route to the final and will be hoping to come out on top again on Saturday against Athenry of Galway but will have to play at their best to come away with the title. This game is fixed for 1.30pm in Portlaoise GAA

Big thanks has to be extended to Teresa Mangan who has put in so much work to get the club to this momentous occasion.

Best of luck to all Teams on the day

Schedule for final day in Portlaoise GAA is as follows: