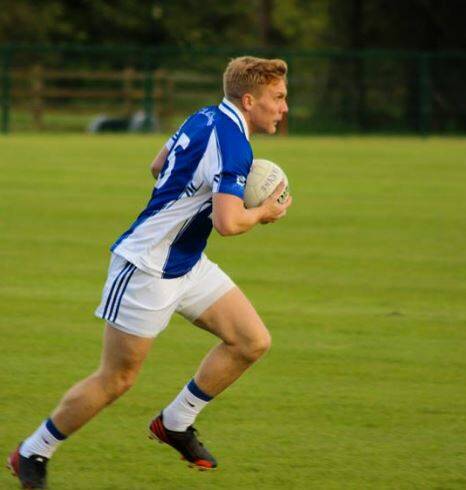 All County A League Division 4 – Group C, Round 2

After an opening round defeat to North Meath outfit Moylagh, Skryne were hoping to bounce back with a victory in this evening’s Round 2 tie against Gaeil Colmcille. As the game approached the mid-point of the second half they had a commanding 7 point lead and looked like they may achieve this goal but somehow they let the men from Kells back into the game and were lucky to escape with a draw as the final whistle sounded.

Kells started at a sprint and had 2 points on the board and as many wides as Skryne fought to get a foothold in the game. Colm Doherty got the ball rolling for Skryne with a pointed free with six minutes on the clock. Ronan McCabe who was excellent throughout got the first of his five points(all from play) when Aidan Tuite palmed the ball into his arms and he slotted over. Niall Morley was next to get on the scoresheet with a fine effort before a delicious Colm Doherty ball found Ronan McCabe in space and he slipped over his second. The game paused for the obligatory water break before resuming with Gaeil Colmcille tagging on a pointed free. A minute later Ronan McCabe laid off to Colm Doherty who sent over from the 40 yard line. Kells pushed forward from the kickout but some fine defending from the Skryne full back line of Timmy Lennon, Jack Dardis and Barry Clarke broke up the attack and Skryne countered and worked the ball down the pitch to Aidan Tuite who made space in front of the Gaeil Colmcille goal before shooting low and hard past the keeper for a goal that put Skryne firmly in the driving seat. David McGoldrick extended the gap to six points for Skryne before Kells replied with two points on the trot. Ian Davis slotted over the first of his two points and then it was Ronan McCabe again who punished his man for making a foray up the pitch by picking up a pass from a Skryne turnover and tapping over his third of the game. Half-time score: Skryne 1-08, Gaeil Colmcille 0-05.

Ian Davis added to Skryne’s tally in the opening minute of the half with a pointed free. Gaeil Colmcille replied with a free of their own. John Morley entered the fray replacing David McGoldrick and pointed with his first kick of the game. The irrepressible Ronan McCabe hit his fourth point as Skryne seemed to be in cruise control. However, a point from play from Kells followed by an excellent goal saw the deficit reduced to four points. McCabe seemed to steady the ship when he added his fifth of the game after a mazy run through the Gaeil Colmcille defence. The game again stopped for the water break. Skryne just needed to hold their nerve and see the game out, but alas things didn’t go to plan. Fatigue seemed to creep in and the Kells men were beginning to find scores easier to come by. Two more points from play left only a goal between the sides. John Morley fetched a mark to the right of the Kells goal and slotted over to ease Skryne’s worries, but Gaeil Colmcille rallied again and hit four points without a reply(three from play) to level matters as the game reached the hour mark. Craig Nolan clipped over a point for Skryne in injury time, but Kells kept pressing forward as Skryne hung on. Inevitably the North Meath men poached an equaliser in an exciting finale which left Skryne shell shocked and ruing points lost rather than a point gained. Full-time: Skryne 1-14, Gaeil Colmcille 1-14.