By proskrynemeath Wed 18th May 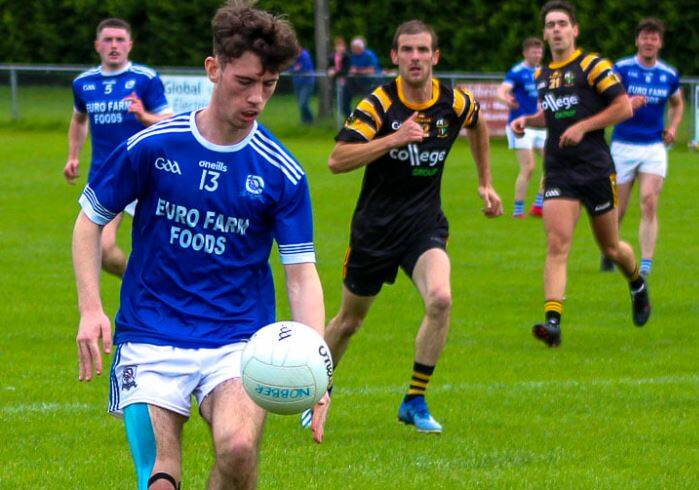 Skryne outgun St. Peters to secure another A League Division 1a victory

A League Division 1a – Round 7

Skryne were a tad lacklustre in the first half of this game but they more than made up for it in the second half with an exhibition of high intensity football and ruthless forward play, particularly from their full forward line of Niall Finnerty, Mark Battersby and Oisín Keogh who hit scores from every angle and tormented their opponents throughout.

As mentioned Skryne seemed to afford their opponents too much respect in the first half and didn’t quite get into their groove as Dunboyne looked the more dangerous of the two teams with Donal Lenihan in particular looking menacing up front. However, despite not finding the right gear, Skryne still managed to keep the scoreboard ticking over. Dunboyne hit the opening two scores of the game before Mark Battersby got Skryne off the mark on the fifth minute. Darragh Campion who had Meath Captain Shane McEntee for company in the middle of the park, added Skryne’s second before Niall Finnerty opened his account with a spectacular point from out near the right hand side sideline. Dunboyne levelled matters again midway through the first half. Niall Finnerty popped over his second and Skryne’s fourth point of the game to see them take the lead again, but the lead was shortlived as Dunboyne hit three points in a row to move ahead again. They also missed a goal chance when their centre forward burst into the Skryne penalty area and blasted a shot towards the Skryne goal only to see it rebound off the right hand side post and out wide. Skryne weathered the storm and notched up two more points from Mark Battersby and Niall Finnerty to draw level again as the game moved towards half time. With their last attack of the half, Dunboyne won a 45 which was superbly converted from the ground to see them lead at half time by the minimum, Skryne 0-6, St. Peter’s, Dunboyne 0-7.

Skryne’s Manager Davy Byrne clearly made an impression in the Skryne dressing room at half time as the Boys in Blue upped the intensity in the second half and while the forwards have been mentioned quite a lot already, the defence also put in a good shift limiting Dunboyne to just three second half points, with Ciarán Lenehan in dominant form in the full back line, while young guns John Finnerty and John O’Regan showed that they have more than settled into the Senior team with both exhibiting just why they were such crucial cogs in the Meath Minors over the last year or two. Darragh Campion and Harry Rooney took control of midfield in the second half and it was from this platform that the Skryne forward line flourished in the second half. Oisín Keogh and Mark Battersby got things underway for Skryne before Donal Lenihan curled over a beauty from the left hand side to see the sides level again for what was to be the last time in the game with seven minutes on the clock in the second half. Suddenly Skryne upped the ante, with Niall Finnerty swinging over an excellent point from wide on the right, before adding another a minute later from a slightly more central position. Dunboyne showed that they still posed a threat when they attacked down the left hand side with Shane McEntee. McEntee squared the ball across to Donal Lenihan whose point blank shot at goal was smothered superbly by Ian Gillett. Dunboyne didn’t leave without a score as their wing half forward tapped over to leave just one between the sides. Niall Finnerty added another two points to his tally, the first from a free and the second after he rounded his man near the endline before chipping over from a tight angle. Mark Batts made a statement of his own, perhaps pointing out to the young Finnerty that there is plenty of life left in the old dog yet, as he hit two excellent points from the left hand side to send Skryne into a commanding five point lead. Finnerty hit his eight and last point of the game with six minutes of normal time remaining. The icing on the cake came when Oisín Keogh shook off the attentions of two Dunboyne men on the 40 before breaking into a solo run towards the Dunboyne goal. The Dunboyne defence appeared to have gone home early as Keogh ran unopposed before unleashing a shot to the left hand side of the Dunboyne goal. The keeper to his credit managed to get his fingertips on the ball, but the power behind the shot ensured that the ball nestled in the back of the Dunboyne net. Donal Lenihan did add a free for Dunboyne, but Darragh Campion fired over a 45 from the ground to see Skryne register a convincing victory which moves them up to second in the A League table behind St. Colmcilles.

Skryne’s management and coaching team will be very satisfied to note that 1-12 of their total tally were scores from play. Final score in Skryne: Skryne 1-16, St. Peter’s, Dunboyne 0-10.