By proskrynemeath Wed 4th May 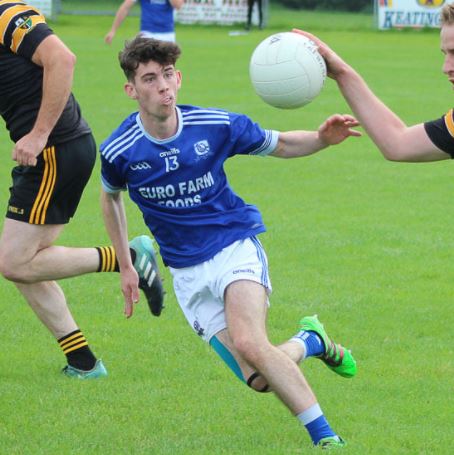 A League Division 1a – Round 6

Ballinabrackey put in an excellent performance in the first half in Skryne yesterday evening and could have lead by more at half time but for eight first half wides, mostly from free kicks. Three late points from Darragh Campion, Niall Finnerty and Mark Battersby saw the Skrynemen reduce the deficit to a single point at half time.

The first half for Skryne was littered with mistakes as they struggled to gain a foothold in the game. Meanwhile Ballinabrackey played with a high tempo and their pressing game forced Skryne into said errors. Ballinabrackey opened the scoring with a minute and a bit on the clock with a pointed free. Niall Finnerty registered Skryne’s first score with a fisted point from a tight angle on the left hand side near the end line. Skryne had two excellent chances for goals on the fifth and eighth minutes. The first chance saw Skryne put together a good attacking move in and around the Ballinabrackey penalty area. There were several opportunities to fire at the Ballinabrackey goal but instead Skryne handpassed around in front of goal before hitting a wide from a good position. On the eighth minute, Darragh Campion made a darting run from midfield before playing a one two with Niall Finnerty which saw him break through on goal. His effort to place the ball into the bottom left corner was thwarted by the Bracks keeper who deflected the ball away. The Bracks immediately moved the ball upfield and chipped over their second point of the game. A Darragh Campion free from the ground levelled matters. Ballinabrackey dominated the first 10 minutes of the second quarter hitting four points without a reply from Skryne. They also squandered a number of chances to increase the gap. However, Skryne finally hit a purple patch of their own with 5 minutes remaining in the half. Patrick Fox won a kickout for Skryne and passed to Darragh Campion who powered through the middle of the Bracks defence, before sidefooting over the bar. Harry Rooney fetched the kickout for Skryne and fed Paddy Fox who made a run towards the Bracks goal. He passed the ball to Niall Finnerty on the right hand side. Finnerty cut across the 21 metre line before hitting a point with his trusty left foot. Mark Battersby tapped over a free in the final minute of the half to leave just the minimum between the sides as the half time whistle blew. Skryne 0-5, Ballinabrackey 0-6.

Skryne got to grips with the Bracks challenge with a much improved second half performance. Darragh Campion pointed a free for Skryne with less than a minute on the clock in the second half. Skryne were reduced to 14 men when Tommy Carpenter was sinbinned for 10 minutes. Skryne, who were much better in the second half managed to keep Ballinabrackey scoreless during this time. Indeed Skryne took the lead with Mark Battersby hitting a fine point from the right hand side after Ian Gillett had raced off his line to deny Bracks a goalscoring chance. Gillett fed John Finnerty, before Finnerty sent the ball forward to Batts who turned his man and fired over from distance. A Niall Finnerty pointed free kept the scoreboard ticking over. Ballinabrackey had to wait until 17 minutes had elapsed in the half to register their first score of the second half, a pointed free. They drew level a minute later. Skryne stretched their legs in the final quarter, hitting five points without a reply, the points coming from John Finnerty, Mark Battersby(2pts), Darragh Campion and Niall Finnerty. The Bracks managed a consolation point at the end of normal time, but this was soon cancelled out by a John Finnerty point deep into injury time to ensure Skryne ran out comfortable victors as the game drew to a close. Skryne 0-14, Ballinabrackey 0-09