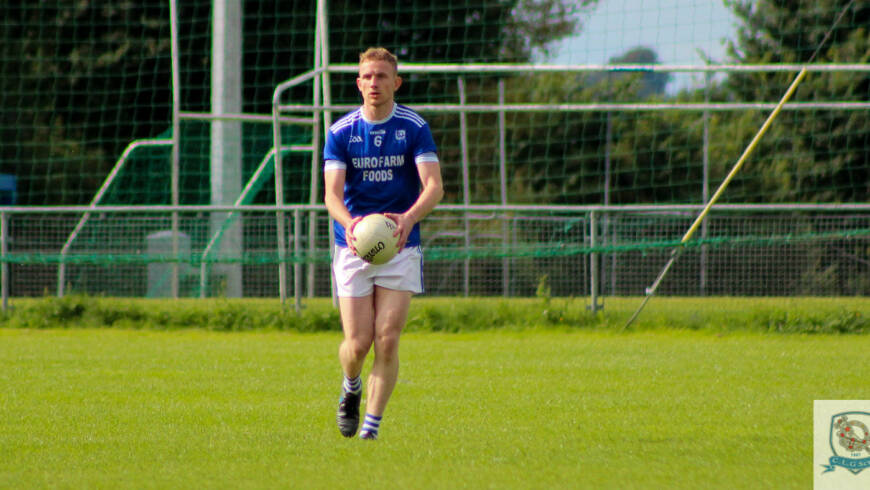 A League Division 1a – Round 5

Skryne made the trip to Enfield to play Na Fianna hoping to build on their win over Summerhill in Round 4. An excellent first half looked to have set the foundation for a Skryne win, but a modest three point haul in the second half from the boys in blue, coupled with missed goal opportunities gave Na Fianna the glimmer of hope they needed in order to reel in the Skryne men and with the last kick of the game, a converted free from Jamie Queeney from the 45 metre line, Na Fianna grabbed a draw from the jaws of defeat.

Skryne were excellent in the first half, hassling and harrying Na Fianna forcing errors and dominating the exchanges. Mark Battersby opened the scoring with an early free. Na Fianna did unlock the tight Skryne defence in the fourth minute of the game when Jamie Queeney raced through the centre and unleashed a powerful shot towards the Skryne goal. However Ian Gillett was well positioned and dealt with the shot comfortably. Niall Finnerty added a second point for Skryne when he won a mark 30 metres out on the right hand side. Finnerty slotted the ball over. Oisín Keogh won a free after an excellent run from midfield where he swapped passes with Frank Carty before being dragged to the ground. Darragh Campion pointed the free from the ground from the 45 metre line. Skryne added a fourth point when Paddy Fox sent a ball into the left corner to Niall Finnerty. Finnerty laid off to Harry Rooney who slipped a ball to Conor O’Brien and he tapped over from the left hand side of the Na Fianna penalty area. Another pointed free from Mark Battersby saw Skryne extend their lead to five points. Na Fianna finally got off the mark on the midway point of the half when Daniel Queeney pointed a free. Skryne added two more pointed frees, one each for Mark Battersby and Niall Finnerty. Daniel Queeney added a second pointed free for Na Fianna on the 21st minute. 3 minutes later a speculative high ball into the full forward line by Na Fianna, bounced off the hard ground and over the last line of the Skryne defence. The Na Fianna corner forward was quickest to turn and grab the loose ball. He kept his cool and slotted the ball into the left corner of the net to drag Na Fianna back into the game. Skryne reacted well finishing off the half strongly with two more points, one from a mark from Niall Finnerty and the second a free from Darragh Campion. They also had a goal chance when Mark Battersby sent a high ball into Niall Finnerty who fielded superbly, beating his man before hitting a daisy cutter towards the goal which was smothered by the Na Fianna keeper. After a dominant opening half, Skryne will have felt that they deserved to be much further ahead at half time. Half-time: Na Fianna 1-02, Skryne 0-09.

Skryne had another goal chance in the first minute of the second half after Darragh Campion raced through the middle of the Na Fianna defence before sending a ball into the small square. Mark Batts won possession and his shot was somehow kept out by the Na Fianna goalkeeper and defender. Na Fianna looked to get the ball forward quickly in the early stages of the second half, but a masterclass from Skryne full back Ciarán Lenehan ensured that the Na Fianna men were kept at bay as he intercepted and won possession on numerous occasions to thwart Na Fianna’s efforts. The opening score of the second half came from Skryne, a Mark Battersby free 9 minutes into the half. Na Fianna replied with two pointed frees from Jamie Queeney. Skryne had a third goal opportunity on the 14th minute of the half when Harry Rooney spotted Paddy Fox heading towards the small square. He sent a high ball in to Foxy who punched the ball goalward but was denied by the keeper. Na Fianna hit a point from play a minute later. Mark Battersby added his fifth point of the game on the nineteenth minute. Jamie Queeney added another free in a game that saw both sides attaining the majority of their scores from placed balls, mainly due to the tenacious defending on show.  Na Fianna had reduced the gap to just two points and Skryne were struggling to trouble the scoreboard despite the numerous goal chances. Jamie Queeney was on hand again to slot over a free, his fourth of the game with seven minutes remaining to leave just the minimum between the sides. Skryne saw a fourth goal chance go abegging after Ciarán Lenehan sent a long ball into Mark Battersby who beat his man and then arrowed towards the Na Fianna goal before squaring the ball to Paddy Fox. Foxy’s shot was deflected onto the post and out for a 45 as Na Fianna again breathed a sigh of relief. Darragh Campion made no mistake with the 45. Indeed his accurate place kicking from the ground would have pleased the great Trevor Giles who watched on from the sideline. Skryne now had a two point buffer with full time approaching.  However, the game moved into five minutes of injury time and Na Fianna pulled back a point with Jamie Queeney again converting a free. Skryne were holding on by their fingernails and with Na Fianna pushing for an equaliser, they won a free on the 45 metre line to give Jamie Queeney a chance with the final kick of the ball to rescue a point for the South Meath men. With a cool head and after plenty of practice throughout the game, Queeney stepped up and fired the ball from the ground over the bar to break Skryne hearts and ensure a share of the spoils as referee Andrew Smith blew the final whistle. Final score: Na Fianna 1-09, Skryne 0-12.