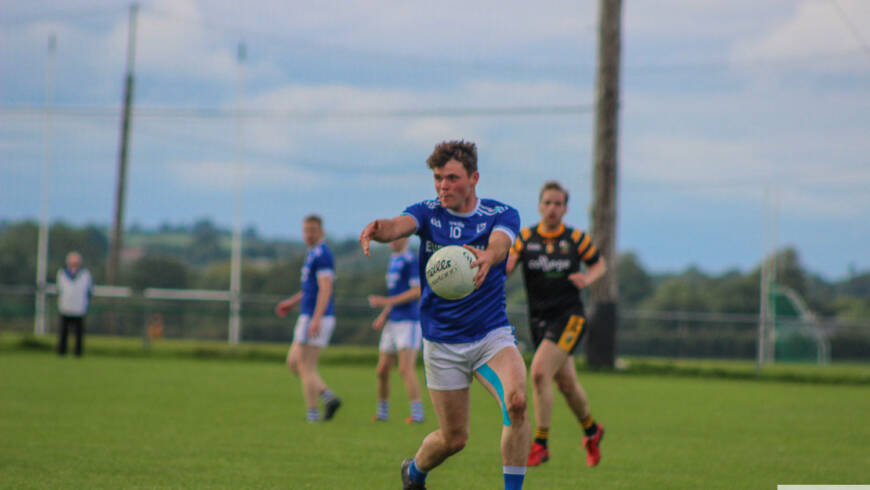 A League Division 1a – Round 3

Skryne travelled to cold Simonstown for Round 3 of the A League where they faced off against former Skryne and Meath legend Colm O’Rourke and his charges in an entertaining game which saw two evenly matched sides do battle, with Simonstown eventually prevailing.

Skryne kicked off proceedings with a blistering attack when Harry Rooney broke from midfield before laying off to Darragh Campion who raced towards the Simonstown penalty area drawing the defenders towards him before hand passing a high ball into Oisín Keogh whose palmed effort rebounded back off the crossbar and away to safety. Simonstown opened the scoring with a point in the second minute before Darragh Campion got Skryne off the mark.  A second Simonstown point edged them ahead again. Oisín Keogh, who had an excellent game, added Skryne’s second point with a fine effort from the left hand side. Mark Batts pointed a free on the eighth minute and amazingly that was Skryne’s final score of the half as they squandered numerous good scoring chances. Simonstown weren’t much better, squandering a number of chances of their own. They added a point on the seventeenth minute and then with only a minute remaining in the half, they hit a goal and a point, the goal coming when a ball was floated over the Skryne defence. The Simonstown corner forward raced onto the loose ball and side-footed the ball from the ground low into the Skryne net. Half-time: Simonstown Gaels 1-05, Skryne 0-03.

Skryne opened the second half with renewed vigour with Mark Battersby pulling back a point with a free in the first minute. Skryne hit an excellent goal with two minutes on the clock after Oisín Keogh plucked a Simonstown kickout from the sky and then fed the ball to Darragh Campion who drifted menacing across the 21 yard line before laying off to Conor O’Brien who floated a ball over the keeper’s head into the roof of the net. Frank Carty almost scored a second goal for Skryne as he raced in from the left hand side and fired a superb shot towards the far corner of the net. At the last second his shot swerved to the right and hit the post before rebounding away to safety. A Neil Burke point levelled matters as Skryne took control of the game. A Darragh Campion pointed free was quickly followed by a second goal from Conor O’Brien after Harry Rooney collected the ball on the right-hand side of the goal on the endline. He made a beeline towards the Simonstown 6 yard box and despite close attention from a number of Simonstown defenders, he managed to square the ball across to Conor O’Brien who finished to an empty net, putting Skryne four points ahead of their hosts. However, similar to the first half, Skryne hit a barren patch where they went 14 minutes without a score with more good chances going abegging. Meanwhile Simonstown hit a goal and two points to edge ahead of Skryne at the midway point of the half, the goal coming after a Simonstown attacker broke in behind the Skryne defence. His low shot was kept out by the foot of Ian Gillett, but the ball rebounded off a player in the six yard box and back into the net. Disaster struck for Skryne on the 19th minute when they were reduced to 14 men and with Simonstown in the ascendancy, Skryne conceded a third goal when a free was lofted into the Skryne penalty area and after a scramble in the six yard box the ball was finished to the net and Skryne were left with an uphill battle to try and rescue a result from the game. Simonstown tacked on another point before Harry Rooney fired over Skryne’s final point of the game. Skryne battled to the end but it was Simonstown who hit the last point to secure a somewhat flattering five point victory in game where there was little to choose between the teams.