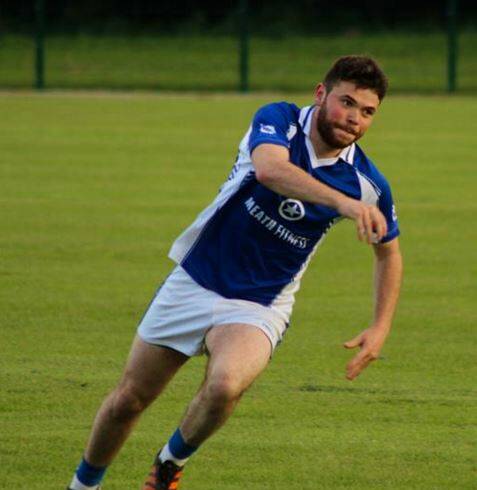 A League Division 1a – Round 2

Skryne had to wait over three months to play their Round 2 match against Ratoath and it was certainly worth the wait as the sides served up a pulsating encounter. On the night Skryne were without inspirational full back Ciarán Lenehan. Ratoath also started without keymen like Joey Wallace, Conor McGill and Bryan McMahon. There was some positive news for Skryne who saw both Ian Gillett and Shane Smyth returning from injury with both emerging as substitutes for Skryne in the second half.

Ratoath’s Cian Rogers got the scoring underway with a point inside the opening minute. Mark Batts pointed a free to open Skryne’s account. With only four minutes on the clock John O’Regan sent a pinpoint pass to Niall Finnerty on the edge of the Ratoath penalty area. Finnerty shot low past the advancing Darragh McPartlin to the back of the net. Ratoath hit two quickfire points from Rogers again and then Eamon Wallace to reduce the deficit to one point. Ratoath poached a goal of their own in the eighth minute when they overturned possession in their left corner forward position before working the ball across to Daithí McGowan who had found some space on the 20 metre line in front of goal. He blasted his shot to the roof of the Skryne net. Three minutes later Skryne hit their second goal when the excellent Darragh Campion slipped Conor O’Brien in on goal. He unselfishly centred the ball to Mark Battersby who palmed the ball to the Ratoath net to edge Skryne ahead again. Niall Finnerty fetched an excellent mark for Skryne and cooly slotted over. Ratoath added another point from a free before Eamon Wallace hit another fine point from play to level matters again midway through a breath-taking half. Cian Rogers added another two points, one a free before Niall Finnerty pulled one back for Skryne. Skryne had a glorious goal chance of a goal on 22 minutes when they took a quick free into Mark Battersby in the full forward line. He squared the ball to Oisín Keogh, who had a great first half. Keogh turned and while taking his shot was fouled and pulled to the ground. Referee Padraig Coyle immediately awarded a penalty. Niall Finnerty stepped up to take the penalty but saw his low shot smothered by keeper McPartlin and Ratoath breathed a sigh of relief as they cleared their lines. Tom Fadden was next to find the target for Ratoath who were scoring some excellent points and keeping the scoreboard ticking over. Harry Rooney burrowed his way through the Ratoath defence before blazing the ball over the bar to grab Skryne’s fourth point. A trio of points from Ratoath saw them open a four point gap as the half-time whistle sounded to end a brilliant first half. Skryne 2-04, Ratoath 1-11.

As mentioned above Skryne introduced Shane Smyth and Ian Gillett in the second half. Skryne were on the front foot immediately and won a free close in which was tapped over by Mark Battersby inside the opening minute of the half. Eamon Wallace added his third point of the game before the excellent Jack Flynn pointed a free from the ground to open the gap to five points. Skryne just wouldn’t go away though and Mark Battersby struck another free before Skryne hit their third goal of the game when a ball was sent into Niall Finnerty to the left of the Ratoath penalty area. He twisted and turned in an attempt to get away from his marker. He somehow shifted the ball across the face of the goal where he found his brother John who had made a run from deep to palm the ball to the net. All of a sudden there was just a point between the sides again. The ice cool Jack Flynn pointed a second free from the ground. With twelve minutes on the clock, Conor Rooney drifted in from the right hand side to stroke the ball over the bar. Skryne’s Conor O’Brien and Mark Battersby combined brilliantly to dispossess a Ratoath defender near the left hand side touchline. OB sent the ball across to Stephen O’Brien who had found some space 30 metres out in front of goal. Stevie sent over a beauty to keep Skryne in the hunt. Mark Battersby added another free to leave just the minimum between the sides at the midway point of the half. Cian Rogers slotted over for Ratoath, but Skryne hit back with another pointed free, this time from Niall Finnerty. Points from Conor Rooney and Jack Flynn(a free) just kept Skryne at arms length as the game moved into the closing stages, but Skryne continued to find the target as Conor O’Brien again reduced the deficit to just two points with three minutes remaining. Ratoath looked to hold possession for the remaining few minutes as the clock ticked down. Referee Padraig Coyle blew the full time whistle as Ratoath hung on to secure victory in what was an enthralling encounter. Skryne 3-10, Ratoath 1-18.

Skryne put in an a good performance and will know they left some scores behind, including the missed penalty, that could have secured them victory. At the moment they lie in fourth place in the table, just a point behind leaders Summerhill and St.Colmcilles and level on points with Ratoath. Skryne play their final game next Tuesday 12th July at 7:45pm in Skryne against St. Colmcilles where they will need a win to give themselves a chance to take a place in the League final.