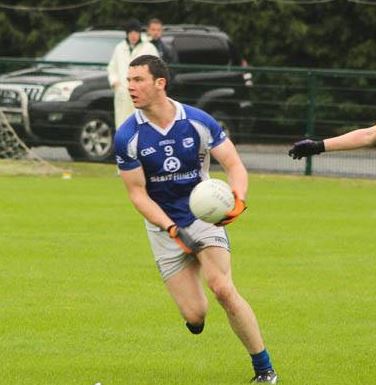 St. Colmcilles came to Skryne knowing that a win would guarantee them a place in the League Final. Skryne too had a real chance of achieving that goal, but needed a win and were also dependent on a slip up by Ratoath or Summerhill. Ratoath did only manage a draw against Na Fianna and so a victory would have been good enough to secure a final place for Skryne.

As usual the Skryne pitch was in top condition but a heavy prolonged shower just before the game meant that conditions were quite slippery in the opening half and the ball was difficult to hold on to. The Cilles lined out with a strong team which included Graham Reilly, James Conlon, David Bell, Ben Brennan, Endy Ehichoya and Shaun Leonard. Skryne were missing four of their regular starting lineup with Ciarán Lenehan, John Finnerty, John O’Regan and David Carroll all away, but Eoghan Greene made a welcome return to the Skryne starting 15.

Colmcilles got off to a quick start with Jeff Kavanagh breaking forward from midfield inside the opening minute to open the scoring, a feat he replicated in the second half. Two points from Graham Reilly increased their lead. Skryne, who struggled to get going in the opening half, had to wait until the ninth minute to open their account when Mark Battersby clipped over a point from the left hand side. James Conlon, Cathal Hilliard and David Bell extended the Cilles lead to five points. Cilles almost cut loose midway through the half when a Skryne attack was broken up and Cilles sent a quick ball down the field to James Conlon. Conlon laid the ball off to Graham Reilly who had run from deep to advance on the Skryne goal. He hit a powerful shot which was saved superbly by Ian Gillett, Darragh Campion fired over Skryne’s second point as Skryne grappled for a foothold in the game. David Bell then added his second and Cilles seventh. With nineteen minutes on the clock, Harry Rooney who was a bright light for Skryne throughout, burst forward drawing attention from no less than three Cilles defenders. He slipped the ball to Niall Finnerty who shrugged off his marker Shaun Leonard before hitting Skryne’s third point. A minute later Skryne were rewarded when they overturned possession and Darragh Campion used his strength to work his way into a scoring position before hooking the ball over the bar. James Conlon who was a thorn in the side of the Skryne defence all evening hit his second point with four minutes remaining in the half. Skryne won a free when Niall Finnerty was fouled in in first half injury time. Mark Battersby made no mistake and ensured Skryne remained in contention with only three points between the sides despite a dominant first half display by the Cilles. Half-time Skryne 0-5, St. Colmcilles 0-8.

Two early points for Cilles from Jeff Kavanagh and and Cathal Hilliard stretched their lead to five points, but Skryne looked much more potent in the third quarter when Paddy Fox moved out to midfield to partner Harry Rooney. He began to control proceedings from the middle of the park and put Skryne on the frontfoot. Mark Battersby hit Skryne’s opening point from a free four minutes into the half. A minute later Niall Finnerty won possession in the right corner before turning his marker and making a beeline for the Cilles goal. He hit a good shot which was tipped around the post by Andrew Beakey and out for a 45. Darragh Campion converted the 45 to see the deficit reduced to just three. Skryne continued to apply pressure and won a further three frees which were converted by Mark Battersby(0-2) and Niall Finnerty (0-1) while David Bell fired over a free for the Cilles. Skryne had their tails up and looked set to find an equalising point but then Cilles overturned possession in the right corner of the Skryne attack. They moved the ball forward quickly to Conlon the magician who conjured up a fantastic goal for the Cilles when he somehow cut through the Skryne full back line. A last ditch challenge dislodged the ball from his hands but he kept his cool and hit a powerful shot from the ground to the back of the net to stymie Skryne’s progress. Darragh Campion did reply immediately for Skryne with a point on seventeen minutes, but this was to be their last score of the game. The last quarter was the James Conlon show as Skryne wilted after the disappointment of conceding the goal. Conlon bagged a hat-trick of points, two from play to cap a fine individual performance. Full-time: Skryne 0-11, St. Colmcilles 1-14.