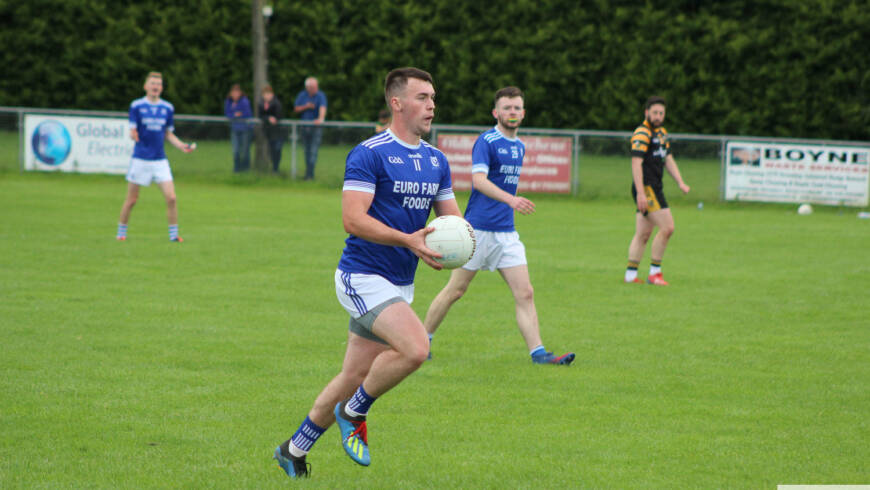 Skryne paid a visit to the home of the County Champions Wolfe Tones in Gibbstown this evening and produced a dominant performance to take both points.

The pitch was in top nick but heavy rain in the opening half threatened to spoil things. However, the teams coped well with the conditions and served up a very entertaining game of football. Wolfe Tones were without a number of key players with Cian Ward, Caolan Ward and Saran O Fionnagain all absent, but nevertheless Skryne were fully aware that they would need to work hard for any win over the Wolfe Tones and work hard they did, with each player putting in a shift and a half to bully the Tones and boss the game from start to finish.

Skryne played with the aid of a stiff breeze in the first half. The opening score came with 2 and half minutes on the clock as Niall Finnerty collected a ball on the left hand side, turned and raced past his marker, before fisting over from a tight angle. Thomas O’Reilly pointed a free for the Tones before Paddy Fox, who was prominent throughout, slotted over Skryne’s second point. Skryne’s third point came from a mark, when Niall Finnerty made a mockery of the wet conditions by claiming a difficult ball that looked like it was about to bounce in front of him, but he somehow got his fingers around the ball and called the mark just outside the 21 on the right hand side. He stroked the ball over with ease. Oisín Martin shrugged off the close attention of the Skryne defence to add a second point for the Tones and this was quickly followed by an equalising score from the boot of the advancing Eoin Donegan. Two frees, one from Finnerty and one from Mark Battersby with a single reply from Thomas O’Reilly left just a point between the sides with 20 minutes on the clock. Skryne got a goal on the 24th minute when Stephen O’Brien sent a superb ball into Niall Finnerty. Finnerty laid the ball off to Darragh Campion inside the penalty area. Campo sidestepped the Tones defender before blasting to the net from close range. Thomas O’Reilly pointed another free for the Tones. Skryne pushed forward again in search of another score and it was full back Ciarán Lenehan who produced one of the scores of the game, a fine long range point after Skryne had been probing down the left wing with no end result, before they moved the ball inside to Lenny who was loitering with intent. Without any hesitation he nonchantly fired over from the 45 metre line with loads to spare much to the delight of the travelling Skryne fans. Skryne almost hit a second goal in injury time when Darragh Campion found Niall Finnerty unmarked on the 21 metre line. Finnerty hit a low shot towards the right bottom corner, but keeper Ciarán Gallagher dived low and pushed the ball around the post and out to safety. Half-time score: Wolfe Tones 0-6, Skryne 1-6.

With the wind favouring the Tones in the second half, Skryne were preparing for an onslaught. However, it was six minutes before the opening score arrived and it came from Skryne’s Darragh Campion. Two minutes later, the game looked to have taken a sudden downturn for Skryne as Oisín Keogh was adjudged to have impeded his man from attacking forward and received a rather harsh black card. Tones opted to launch the ball into their full forward line, but their effort was thwarted by Ciarán Lenehan who broke the ball down to a Skryne defender and Skryne immediately hit the front foot with Darragh Campion finding Mark Battersby in the inside forward line. Batts squared the ball across to Niall Finnerty who palmed the ball to the Tones net to open up a seven point gap. Skryne were almost caught napping straight away from the quick Wolfe Tones kickout. They got the ball forward quickly down the right wing before sending a high ball into the Skryne penalty area where Fiachra Ward had made a superb run. However, the high ball was just out of reach for Ward and he only managed to get a finger tip to it before it went out over the endline to safety. Niall O’Reilly hit a point for Tones on the eleventh minute, but they were finding the Skryne defence very hard to penetrate and Skryne looked comfortable for most of the half, controlling the game. Darragh Campion added another fine point from play for Skryne despite some heavy challenges from the Tones defence. Niall Finnerty pushed the lead out to eight points with ten minutes remaining . Substitute David Carroll looked like a man on a mission when he came on for Skryne and was responsible for a number of superb turnovers which were greeted with cheers from the Skryne crowd. Oisín Martin added Wolfe Tones eight point on the 24th minute but Tones just didn’t look like they had the craft up front to seriously threaten the Skryne defence. Niall Finnerty topped off an excellent performance with Skryne’s final point of the game, taking his personal tally to 1-5. Ian Davis in the Skryne goal looked certain to keep a clean sheet, but with the last attack of the game Tones grabbed a consolation goal when Fiachra Ward rose highest to get his fist to another high ball into the square and direct the ball to the back of the Skryne net. Davis who is standing in for the injured Ian Gillett has proven to be an excellent deputy, with very accurate and effective kickouts. He won’t be too disappointed to have conceded the goal which was of little consequence as Skryne ran out comfortable victors. Final score: Wolfe Tones 1-8, Skryne 2-11.

Skryne move up to third in the table, just a single point behind leaders Summerhill and St. Colmcilles. However, Skryne do still have a game in hand on these two teams. Skryne will play their game in hand next Tuesday 05th July against Ratoath.